I’ve been thinking I might have a go at writing some “open when” letters for Popeye. I’m sure you’ve all heard of them. Maybe some of you have even sent them, if you have I’m a teeny but in awe/jelly.

“Open when” letters are letters you write before they deploy that they can open when they’ve deployed at various pre stipulated points. 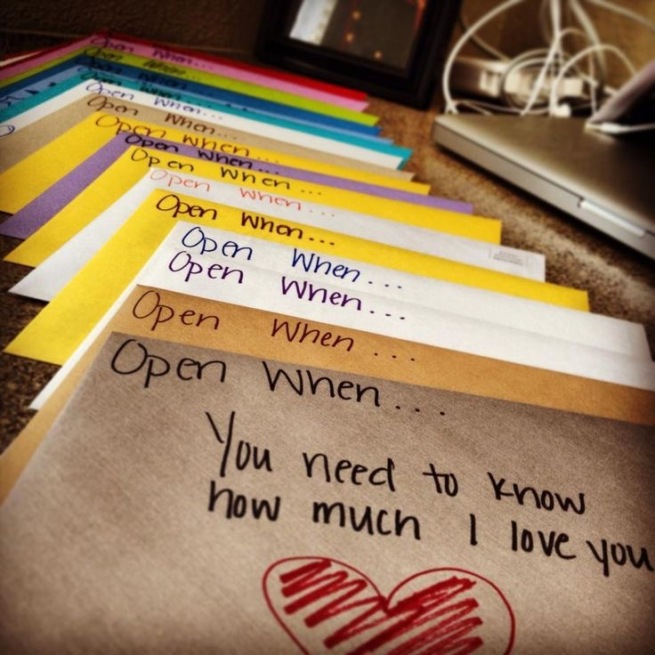 They are a really lovely idea and I’m sure they bring a lot of satisfaction and happiness to many of you.

But (you knew there would be a but didn’t you!) they just ain’t my style.

If me and Popeye were to do this, there would be some serious reality checks involved.

First of all I don’t know when the fuck I would find the time to write a dozen or so poignant declarations of love and reassurance. I barely have time to wash myself or go for a wee in private. Also I’d much rather spend those last few days actually hanging out with Popeye.

Secondly I’m 95%sure Popeye would either read them all in one sitting or forget about them until I mentioned them on the phone and/or the night before homecoming. Kind of ruins the magic a tad.

Thirdly I would be so tempted to put joke answers inside. I don’t think I can be trusted not to be a complete cow and do something like this-

“Open when… you feel like crying” *Popeye, with a sniff, opens letter*

Or “open when…. you are homesick”

Yeah maybe that’s not the best way to go.

Got it. I’m going to write him “Open when” letters, for a real (as in boring and normal) military relationship, my ideas so far include:

And the best thing about this is that I can save time and effort in the contents of the letters! A one-word-fits-all “open when” letter system!

I’ll let you know how I get on,

P.s the choc orange was totally worth it.

2 thoughts on “Alternative “open when” letters. For the realistic military wife.”